"It's the Most Wonderful Time of the Year"

Ok people, you can take a breather now.  Christmas is officially over.  Well, let’s say unofficially because if your family is anything like mine, you may have some gift giving still to come.  But as far as the holiday itself is concerned, Christmas Day has once again come and gone.  As a follow-up to my previous post about a typical Christmas Day in the Chaney family, I figured a wrap up of this year’s festivities was in order.  So sit back, relax with an adult beverage if the mood strikes you (assuming it’s after noon of course…wait, who are we kidding?  When has the time of day ever stopped you before?), and enjoy my Christmas Day Wrap-Up.

What would Christmas be like without drama?  Let’s all think about that for a moment as it’s likely none of us have experienced a drama-free Christmas before.  Ah, that was nice.  Ok, back to reality.  As our family has grown in number over the years, it has also grown in diversity of occupation.  No longer is it an easy task to get everyone together on weekends since many of them have to work.  My wife and sister are nurses and my brother-in-law is a police officer so coordinating schedules is like watching an episode of LOST; it’s confusing and make’s your head hurt.  Holidays are no exception as often times someone is working while everyone else is off.  This year, all three of our public servants got stuck with Christmas shifts, but thankfully they were all the same.  The plan was for Georgeann to pick up Jen at our house since they work together in the same hospital and after work, drive up together to our Grandparents where the family would be gathered.  Paul, my sister’s husband, would meet them after work and drive up as well.  Seemed like a simple, coordinated plan to me…hmm, not so much as it turned out.

The nurses were to be at work by 7:00am that morning so Georgeann was supposed to be at our house by 6:15 to pick up Jen.  6:15 came, no Georgeann.  6:30, still no Georgeann.  We began calling her cell and house phones but no answer.  I called Paul to inform him of the situation and he said he would call her as well.  Meanwhile, Jen couldn’t wait any longer and had to leave for work on her own.  The phone calls persisted with no answer from Georgeann.  As the minutes passed, what first seemed like no big deal was quickly making everyone nervous.  Paul decided he would leave work and head home to check on her while we all continued to call.  As he arrived at their apartment, still calling their phone, Georgeann picked up.  Apparently, it takes the equivalent of a marching band to wake her up from her slumber because she had slept through her alarm and our barrage of phone calls.  As word spread that she was fine and had simply overslept, my mind focused on two things.  First, thank God she was ok and second, how best can I make fun of her for this?  I settled on referring to her as Rip Van Winkle for the rest of the day and henceforth in this posting, she will be known as such.  Ok, back to the good stuff.

With the drama of the morning over, it was time to wake up the kiddies.  I informed Izzy and Jake that it was Christmas morning and tried to help them understand the magnitude of the day.  Seeing as how they are 20 months and 4 1/2 months old respectably however, I simply got a “coo” from Jake and was informed by Izzy that she had pooped.  I suppose I couldn’t have expected more than that.  After dressing the kids in their Christmas outfits as the wife had instructed, we headed over to Jen’s folks so they could spend some time with Iz and the Jakester before we headed up to my Grandparents for the day.

My excitement for the Christmas holiday is well documented so you can imagine how difficult it was for me to have to wait until the afternoon before opening presents.  The family was gathering around noon and we were going to eat at 1:00 so presents would have to wait.  I thought I could filter down some hints about opening presents early through my 4-year-old cousin but all that resulted in was more presents for him to open.  My plan was foiled.  My disappointment was quickly drowned by the opening of several bottles of red wine during dinner and I settled into the zone as I pounded multiple slices of homemade lasagna.  After dinner would normally be the time for the men of the family to slip into their food comas but not today.  There was work to be done. 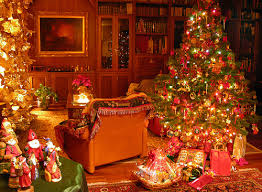 As is the case every year, the “grown-ups” participated in their annual secret santa fiasco.  And as is the case every year, someone got confused as to the order of the gift giving and several minutes were spent disputing who went next.  I had put the kids down for naps before dinner and while Jake’s excitement got the best of him, waking him up after only about an hour, Izzy was content to sleep the day away.  Whose daughter is this anyway?  It’s Christmas for crying out loud!  By the time dinner was over and cleaned up and the gift giving began, we were well into the 3:00 hour.  Soon Jen, Rip Van Winkle, and Paul would be getting off work and joining the festivities.  Thankfully, there was no additional drama to report from the group once they arrived.

Gifts were being passed around like a doobie at a Phish concert.  Some chose to open them immediately after they received them while others stockpiled their loot in order to ensure they didn’t run out.  Jen and I had our hands full opening the presents for the kids as well as our own making it feel like we had received three times as many.  It was a great feeling.  I had dropped hints sporadically throughout the holiday season that I would appreciate any gift that would help me accomplish an item on my 30 Before 30 list.  These not-so-subtle hints were taken exactly as I had hoped and I now have some serious ammunition to attack the list.

From Aunt Leslee, I received a brewing kit and some international beer ingredients.  I look forward to getting drunk off of what is sure to be a horrible first try.  But you know what they say, “If at first you don’t succeed…drink some more beer.”  Or something like that.  Aunt LeeAnn, a movie buff in her own right, was obviously excited about my goal of watching the 10 best movies of all time.  She gave me several on DVD as well as what is considered the definitive translation of Leo Tolstoy’s Anna Karenina, the book I intend to read.  The book is 817 pages long, not including the introduction and notes about the author.  Perhaps the Cliff Notes version would have been a better idea.  I better get started on this one right away.  I also received a gift certificate to the famed Charleston Restaurant in Baltimore from my Aunt Lauren and Uncle Brian.  Jen and I plan to use this sooner rather than later.  The gifts from my Grandparents were numerous and wonderful as always and the room was full of excitement.

Everything I received this year was great, but my incredible wife stole the show with her gift.  She had been taunting me with tidbits of information about my gift for weeks.  Her excitement about the gift had been growing, subsequently leading to my excitement about my gift to her steadily declining.  It was obvious her gift was better than mine.  A bigger man may have used this as motivation to go out and find the best gift imaginable.  I am not a bigger man…I was just glad the gift was mine!  So with Christmas finally here, Jen couldn’t wait any longer to give me this present.  The box was about the size of a toaster with a lift off lid and a note that said, “Merry Christmas Jim…”.  Opening the lid of the box revealed another, smaller box with another lid and note, this one saying, “Your chances were slim…”.  I was picking up on the rhyming theme but was still unsure of what was coming.  Again, I lifted the lid of the smaller box to reveal another one with a note that read, “So this is a fluke…”.  Sticking with the rhyming theme, there was only one word that rhymed with fluke that would have Jen so excited about her gift to me, and it wasn’t puke.  I quickly looked up to see a smile slowly spreading across her face.  I tore into the last box and there it was.  Sitting there like the golden ticket from Charlie’s Wonka bar was a Duke Basketball ticket.  Before I could even wrap my head around what I was seeing, my father was suddenly being presented with his own surprise…another ticket for him to accompany me!  We must have looked like a couple of little boys in a candy shop.  I couldn’t believe it.  The grown up in me knows it must have cost her a fortune but the kid in me was giddy with excitement.  So on Sunday night, January 9th, if you happen to be around your TV, check out the game and you might see us.  We’ll be the only fools in Terps red surrounded by thousands of Cameron Crazies.  I can’t hardly wait!

So if there was an award for best Christmas gift, this year it goes to my wife.  And for everyone else, this should be added incentive for you to top her with your gift to me next year.  Good luck!  The rest of the night was basically a blur.  Bag after bag of wrapping paper made its way to the trash and everyone’s pile of presents grew taller by the minute.  Loading the car felt like we were moving out-of-state or something.  The kids came away with a ton of new toys which means Mommy and Daddy have to find places to put them.  I’m thinking of removing the couch entirely and we can all just sit in Bumbos.

We made it home, put the kids in bed, and nearly passed out on the way to our bedroom.  What a day it had been.  This was only the beginning as there were still two more Christmases to go.  As I slowly drifted to sleep, I felt like Ralphie from A Christmas Story dreaming of getting off spectacular hip shots with his Red Rider BB Gun.  I had a wonderful Christmas for so many reasons and hope you did as well.  Now it’s time to start making a dent in my 30 Before 30 list.  There’s lots to do and less than a year to do it in.  One thing I must mention is that the Polar Bear Plunge is coming up soon.  I have already registered myself but have also registered my own group.  If anyone wants to donate or better yet, join me at the plunge, click here to find out more.  Happy Holidays everyone and see you back here soon!

6 thoughts on “A Christmas Day Wrap-Up”