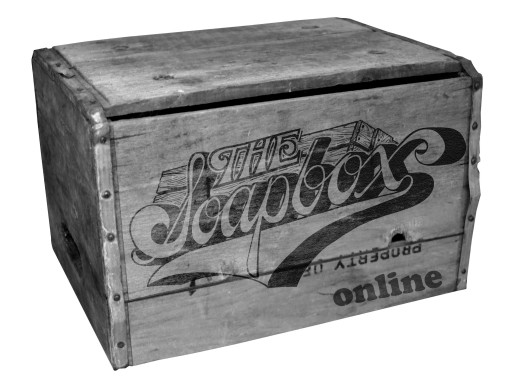 When I sit down to write a new blog post, there really isn’t any particular process that I follow.  I don’t have a special place where I write or a time of day I prefer.  Some days, I don’t even have a subject or idea prepared before I hit that first keystroke.  This is not one of those days.  I generally try to stay away from topics that spur a lot of debate; I prefer to keep this place light and humorous.  When I write, I do my best to choose stories or topics that will appeal to the masses.  I do this because I want everyone who visits here to feel included rather than isolated.  I also do it because I am addicted to page views and I need my fix.

Today, however, I am officially introducing you all to my soapbox.  He’s not very intimidating, just a little guy like me.  But if you happen to strike a nerve with him, he’ll come at you like a spider monkey!  I’ve touched on this topic here and there over the past several weeks but the more I hear about it, the more I feel the need to voice my opinion.  Sorry to all you non-sports fans out there, but the topic I’m referring to is the NFL lockout.

And that about sums it up.  There’s like 8 gagillion dollars generated from professional football and these two groups of millionaires and billionaires can’t decide the best way to split it up.  Football fans have been hearing about the threat of a lockout for well over a year now, ever since the owners officially opted out of the collective bargaining agreement that was in place.  The 2010 season came and went with minimal talk about the lockout and maximum talk about what was actually taking place on the field.  The moment the lights went out in Cowboy Stadium after Super Bowl XLV (that’s 45 for all you non-Romans out there) however, the labor dispute grabbed the neck of every sports media outlet around the country and choke-slammed it into submission.

With the help of The Twitter and other medium providing news so immediate it hasn’t even happened yet, fans are being force-fed the latest “he said, she said” bitchfest.  Through all the issues over who deserves this and what group should get that, both the players and owners have neglected the 3rd leg of the stool; THE FANS.

Without the fans, the paying public, neither of these groups would even exist.  It is because of the fans that players are able to negotiate multi-million dollar salaries.  It is because of the fans that owners can generate a pool of billions of dollars and build new, state of the art stadiums.  The fans have made the NFL what it is today, the King of the sports jungle, and it seems as if these two groups have forgotten that.  Instead, they release press statements and tweets trying to sway us to one side or the other without offering anything in return.  How ‘bout lowering ticket prices guys?  How ‘bout making a day at the stadium be an affordable option for families?  Has that thought crossed anyone’s mind?

Instead, they go on radio shows and TV appearances and tell us how sorry they are for all the trouble and how embarrassing it is to them.  Then they hop in their lamborginis (see, they’re so expensive, I’m not even allowed to spell it right) and drive home to their million dollar estates.  Am I being stereotypical?  Sure.  Are there plenty of players who only make the league minimum?  Absolutely.  Is there a grand canyon-sized gap between the most and least profitable teams in the NFL?  Yessir.  Do I care?  Not one bit!  Try explaining to the middle class working fan who gets by on $38,000 a year, why the league minimum for players with just 1 year of experience is $400,000.  Explain to him why it’s not fair that small market teams and big market teams have to share the 9 BILLION DOLLARS IN REVENUE that the NFL brings in.  Could there be a worse time for guys who take baths in $100 bills to start arguing over money?  How can they possibly expect to get the fans to support them when the economy as a whole is still doggie-paddling to stay afloat?

The answer, in my opinion, is pretty simple.  It’s the same reason why all of this fuss is happening in the first place and it’s the same reason why it will never change.  We, the fans, love football unconditionally.  It took 10 years and a few cargo jets worth of steroids to bring the fans back to Baseball after the strike in 1994.  That won’t be the case with the NFL.  We (myself included) are so addicted to the sport, that as soon as the players step back onto the field for the first time, the stadiums will be sold out and the TV ratings will go through the roof.

Sure, there are people who will hold grudges.  Fans who will treat the game like a girlfriend who cheated on them with their best friend.  The pain of this ugly dispute will stay with them and they will not go to the games or buy the merchandise or sit, glued to their TV every Sunday.  But it won’t be enough.  For things to change, I mean really change, it would take a Braveheart-like stand by the fans as a whole.  A coalition of patrons refusing to give their hard-earned money to a sport that ignores them.  Despite my love of the game (not to mention Fantasy Football), I would support this massive attempt at the upheaval of the status quo.  Unfortunately, I don’t see it gathering the momentum it would need to succeed. 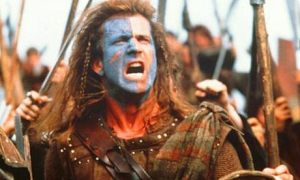 Is this going a little overboard?

I see small pockets of fans here and there, picketing the stadiums with their signs and shouting creatively rhymed chants.  My guess is that the majority of these folks will be right back in the parking lot tailgating on opening day.  I don’t blame them for that, they love the game and always will.  I do as well, along with many of you.  But wouldn’t you be willing to sacrifice a season of football if it meant you could be an active participant in changing the culture of the sport?  The fans are in possession of the greatest bargaining chip in the game, but we refuse to play it.   We could show these two groups of selfish crybabies that we hold the power, but we refuse to do it.

I don’t know; maybe it’s foolish to think that even a mass protest, a sustained refusal to submit to what is simply “the way it’s always been”, would be enough to make the folks running the show stop and think.  Would it show the people who profit most from this game that the fans are the engine that keeps it all moving?  In my made-for-TV-movie dream, I’d like to think it would.  But until we are all able to collectively stand up and say, “We Demand To Be Heard!” I suppose we’ll just have to let the battle play out between a group of millionaires and a group of billionaires while we wait on the sidelines.

If you’d like to read another article on this subject written by someone who knows what they’re doing, check out this piece by my favorite sports columnist, Bill Simmons.

15 thoughts on “Soapbox, This is Everyone…Everyone, This is my Soapbox”