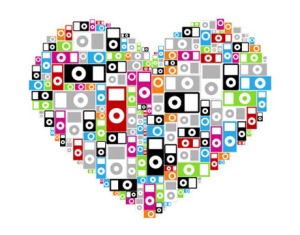 I am a music lover; all kinds, all artists, all eras.  I’ve always prided myself on having an eclectic taste when it comes to music.  not sure why that is something to pride myself on, probably because I don’t have much else, but that’s beside the point.  I have wanted to write a post about music for a while, but wasn’t sure the direction I wanted to take with it.  Then it occurred to me.  How fun would it be to write a story using song titles from my iPod?  The answer…wicked fun!

What started as a short story using about 40 or so song titles, turned into what is now a four-part mini series, if you will, that contains every song title in my iPod library.  For those of you with thousands of songs on your playlist, you’ve got me beat.  My total comes in at right around 500, but they are 500 songs that I truly love.  Anyway, without further ado, I give you part one of “An iPod Love Story”.  Part’s two through four will follow as the week progresses.  Hope you enjoy!

(Note: I have highlighted the song titles throughout the piece by writing them in bold.  Hopefully this doesn’t distract too much from the reading, but I wanted to be able to showcase the songs.)

“Where are you going?” He said, desperately hoping she would stay.

“I don’t wanna be in a relationship that isn’t going anywhere, that’s just hanginaround.” Adrienne explained, trying not to breakdown. “I got that job in Boston.”

“So this is how a heart breaks.” Josh thought to himself as she took one step closer to the door.  Her eyes were blurry with tears as she asked one last time, “Would you go with me?”

He felt the sharp hint of new tears as he tried to speak. The room seemed to have no air, making it harder to breathe.  He wanted, more than words could say, to tell her the truth.  But it was too late, she was already gone.  He walked to the bathroom, put his hands on the sink and stared at the man in the mirror.  A stranger stared back at him.  He wished he could be the man he used to be; a man whose love for her was stronger than his desire to be rich, to be a billionaire. He laid down on his brass bed and for the first time, thought maybe this really was the end.  As he closed his eyes, he remembered the first time he saw her.

Standing outside a broken telephone booth one sunday morning, she caught his eye.  Like an invisible touch he felt overcome by such a pretty young thing.  She heard him stutter as he asked her for the time. There was a feeling; no, more than a feeling, right away.  Sparks, like fireflies in the night sky, were felt by both of them.  This was not a typical situation. He spent the next 2 years with this uptown girl and it was magic.  They’d take a walk on the ocean and dream of spending their days on an island in the sun.  They had their regular table at the café up around the bend and would talk about forever while street artists painted scenes from an italian restaurant. Life was picture perfect for a while, but nothing lasts forever.

Josh’s ideas for the next big “money maker” were changing like the seasons, and slowly she grew sick and tired of always feeling forgotten.  After 2 years of love and luck, she felt like they were at a crossroads, at the corner of the boulevard of broken dreams and grey street, and he remained colorblind to her unhappiness.  She’d tell him, “We have to fix this before we come undone.”  He’d tell her, “Have a little faith.” But Adrienne had heard that so many times before, she was practically numb to it.

All her frustrations, bottled up for so long, exploded one day like dynamite.  She walked into his house, calm like a bomb, slamming doors and stomping up the stairs.  Boom boom pow, the noise echoed from wall to wall.  He assumed she simply had a bad day when he asked why she was crying.

“How can you be like that?” she began. “Like you don’t see what’s wrong.  It’s not just in my head, you know.  I feel like I’m wasting my time trying to make this work with you.”

“Hey, soul sister,” he started to speak, using the nickname he always called her when he wanted to make her smile. “It won’t be like this for long.  Soon, we’ll be living the better life.  I’ve gotta feeling this new project is going to be the one.”

She sat there watching him speak, but had stopped listening.  He just didn’t get it.  The damage had been done; what she thought was unbreakable had been broken.  She spent the next four days trying to come up with the remedy for their problems but no such answer surfaced.  She couldn’t pretend any longer that everything was alright.  A few months back, a company in Massachusetts called Cape Cod Kwassa Kwassa, had contacted her about a job.  She told them, “I’ll call you” but never actually intended to.  Now, she sat by the phone with nothing left to lose and dialed the number.

Josh was awoken abruptly by the sounds of shattered glass from the building down on the corner.  It was being demolished because the structure had been labeled as too dangerous and so workers had begun the destruction process.  The sound served as a wake up call for his head which, in turn, talked his body into getting up.  He walked to the window and looked down at the old warehouse turned nightclub.  He recalled the many summer nights he and Adrienne spent there listening to cover bands butcher classics like Baba O’Riley and Bohemian Rhapsody.  “Thanks for the memories.” He said to himself as he shook his head.

He turned away from the window and like a switch suddenly being flipped, realized he was making the mistake of a lifetime by letting her leave.  “I have to get her back while I still got the time.” He said to himself as he ran out of the house and into the first big yellow taxi he could find.  “215 Allison Road.” He told the cabbie as they sped off.

The driver took all the backstreets and arrived quickly at Adrienne’s house, but to Josh it felt like the longest time sitting helplessly in the backseat.  The cab pulled into the driveway and Josh ran to the door.  He pounded on it, calling her name over and over, but no response.  Hearing the commotion, Adrienne’s neighbor Iris called to Josh from her window.  “She’s gone,” Iris yelled. “Movers just left a few minutes ago; heard ‘em say she caught the early flight this morning.  Sorry you missed her.” As she closed the window, Josh collapsed onto the front stoop.  His semi-charmed life was going down in flames and his one chance to make it right was gone.  He climbed back into the cab and sat in silence as the car drove away.  He instructed the driver to drop him at the bar on Front street and he spent the rest of night alone with his thoughts and a bottle of tequila.  “Only the good die young,” He thought to himself.  “So I guess I’ll live forever.”

What’s next for Adrienne and Josh?  Is it really over between them?  Does Josh have some super power that will allow him to indeed live forever?  Find out here in Part 2.