I have a recurring nightmare about cruise ships that my wife likes to make fun of me for.  Basically, I’m standing on the balcony of a stateroom overlooking the beauty of the ocean, when suddenly the rail of the tiny platform gives way and I plummet to my rather wet demise in the icy waters below.  As we prepared for our Bahamian cruise this past weekend, several people wished us a great time and then, under their breath, would add “Watch your step Jim” or “Don’t get too close to the edge.”

“Haha, good one.”  I would reply with nervous laughter.

Well, if you’re reading this, one of two things happened this weekend.  1) There was no “man overboard” incidents and we simply had a great time or 2) My nightmare became a reality and someone has confiscated my blog for their own personal enjoyment.  Ok, I won’t leave you in suspense any longer…we made it home safely, minus a few sunburned areas on my body that may or may not be the result of sun poisoning.

If you’re like me, vacations tend to begin and end with nervousness and fear.  That is to say that I hate to fly.  So other than our yearly trips to Ocean City, MD (which takes just a few hours by car), most of our vacations these days include air travel.  Such was the case with our weekend cruise to the Bahamas, which began with a flight from BWI to Miami International.  After 2 hours and 15 minutes of white-knuckling my armrest and Jen’s hand, we landed safely and I was officially on vacation.  Jen, however, had to ice down her possibly broken fingers before being able to actually start enjoying herself.

The process of clearing security at the port of Miami was much less intrusive than I expected, which is to say I wasn’t probed or fondled without first being adequately courted.  We received our Sea-Pass cards; which would serve as room keys, passports, and buy-anything-you-want-with-it cards (until the bill arrives under your door the day of departure and you’re forced to face reality and a second mortgage), and we boarded the giant vessel.  People with rolling luggage scurried about the main lobby of the ship like little kids with their red-rider wagons looking for treasures to collect. 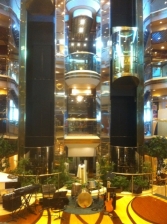 "...after the party, it's the hotel lobby", or boat lobby in this case

The ship’s crew members were spread out all over the boat directing people to their rooms and the nearest dining area in order to begin their 3-day, all-you-can-eat extravaganza.  Other crew members manned tables in the lobby for guests to sign up for excursions, spa treatments, and a variety of beverage packages.  Within 5 minutes, we had abused our SeaPass card to the tune of a couple hundred bucks, and quickly exited the lobby before any additional damage could be done.

We followed the signs to our stateroom, or spacious walk-in closet as I fondly referred to it as, and unloaded our bags.  Having an inside stateroom accomplished two things; first, it assured me the safety of not having a balcony or porthole to fall off or out of, and second, it gave us the opportunity to live like canned sardines for 3 nights; a win-win situation. 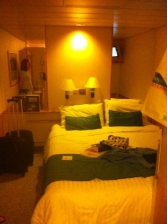 We had our first of many meals at the all-you-can-eat buffet, toured the ship in order to find the most direct route to our stateroom from every single bar, and then made our way to the pool on the top deck for a “set sail party”.  Our appearance was about as brief as a Britney Spears marriage though as we had to get ready for our scheduled dinner seating at 6:00pm.

After requesting a private table, and then subsequently being declined, we were prepared to spend our evening dining with the most obnoxious couple we could imagine.  We were pleasantly surprised however, when we met our dining companions, Bennett and Markina, as they seemed darn close to normal.  We enjoyed our gourmet meal and the first of our 3-bottle wine package we had purchased upon arrival, then headed off to see what the ship had to offer for the rest of the evening.  We ignored our parental instincts to go to bed early and declared, “We are kid free…we must stay up until at least 9:30!”  We watched the “Kick-Off Show” in the large theatre where the Royal Caribbean “singers” and “dancers” performed.  I put those titles in parenthesis not to be rude; I mean these people were pretty good.  But let’s put it this way; if you’ve ever wondered what happens to the people who finish in 9th place or below on “American Idol” and “So You Think You Can Dance”, wonder no more…I have found them.

After the show, we bounced from bar to bar in an effort to seem as young as people tend to think we are (but we all know we’re not), then returned to our cozy room for the night.  As the sun came up over the horizon Saturday morning (or at least I assume it came up…you can’t see anything in these dark little closets!), we found ourselves anchored just off the coast of CoCo Cay, Royal Caribbean’s private island and our destination for the day.

We caught the first ferry to the island and after 5 short minutes gliding over the clear blue Caribbean, we docked at the pier and off-loaded.  Jen had scheduled herself for a massage on the beach and I had planned to lay comatose on a blanket listening to the ocean so as you can imagine, we both had a lot on our plates.  Jen tried to talk me into joining her for the rub down, but after a deep-tissue experience in Mexico that felt more like I was being tortured for information I didn’t know I had, I graciously declined.  I found my spot by the cove, pulled up a beach chair and attempted to catch up on Anna Karenina.  I know, not exactly beach reading material, but I am quite far behind.

My view from the beach at CoCo Cay

The day was as relaxing as the above picture would have you believe.  After the massage, Jen met me by the water and we lounged around like it was our job.  We had lunch on the island before heading back to the ship in the late afternoon to get ready for the formal Captain’s dinner.

Apparently when you are anchored at sea, the definition of formal no longer applies to people.  Despite the relatively clear description of what constitutes formal attire being presented in the daily newsletter delivered to every passenger’s door that morning, we passed every make and model on our way to the dining room.  From tuxedos to t-shirts with tuxedos printed on them and everything in between was on display.  It seemed as though some people just held their suitcase up, shook it violently, and whatever fell out would be their “outfit” for the evening.  To each his own, I suppose.  Jen and I were dressed to the nines however, looking fabulous as usual as we found our table for the evening.

We had been informed earlier in the day that our seating had been changed from 6:00pm to 8:30pm.  We assumed it was because they had found a private table for us.  We assumed wrong.  Apparently they felt that we were such great company for our prior table companions, we would be better suited for an even larger table with more strangers.  So our seating had been changed and we now sat waiting to see what odd balls we would be tasked with making small talk with tonight.  Again, luck shone down on us as our new dining group proved to be great company.  Unfortunately, our luck did not carry over to the casino as we crashed and burned in a matter of minutes and limped away, licking our wounds.

After the roulette debacle, we took in some music, a magic act, and several more drinks before heading to bed around midnight, an hour neither of us had seen in quite a while.  After an overnight voyage, we were greeted Sunday morning by land, buildings, and roads.  We had arrived in Nassau.  Exiting the boat, we were led down the pier and into the customs building, separating the ships from the city.  After passing through the rather lackadaisical clearance process, we headed out into the city to explore and pick up a few souvenirs for the kiddies.  Two hours, two gifts, and one frightening pass through a straw market (where we were essentially bullied into donating to the “school for kids fund”), we re-boarded the ship for some more people-watching-by-the-pool time.

We enjoyed a farewell show, featuring none other than “your Royal Caribbean singers and dancers!”, before complementing another excellent dinner with the final chapter of our wine trilogy.  The rest of the night included an “adult” comedy show (where they said cuss words! He says in a whisper, trying to hold back immature snickering.) and packing up our stateroom so we’d be ready to roll in the morning.

Party in the city where the heat is on...

By the time we arrived back in Miami, we were officially in munchkin withdraw and ready to get home.  The departure process from the ship was far easier than we both anticipated and we were in a cab heading to airport within a half hour of leaving our stateroom.  The taxi driver took us on a lovely tour of what appeared to be the gang hub of the city.  I slipped him an extra $10 as we approached a red light and said, “Keep that foot on the gas!”  We made it safely to Miami International and I was forced to end my vacation the same way it began, with my stomach doing donuts as 100,000 lbs of metal carried me 30,000 ft above the earth.

Within 45 minutes of touching down, we were back to the comforts of home and our much-anticipated reunion with Iz and the Jakester.  Despite all logic to the contrary, the kids seemed to have doubled in size, like those squishy animal toys you get at a fair that expand when you soak them in water.  I fully expected Izzy to ask me for the keys to the car, but thankfully, after closer inspection, they appeared quite similar to how we left them.  I’d like to think they missed us while we were away, but all evidence suggested otherwise.  Still, it was a much more enjoyable return from vacation than any I have had before.  All in all, it was a great getaway with my favorite girl and a perfect way to celebrate 5 wonderful years of marriage.

8 thoughts on ““I Got My Swim Trunks…And My Flippy Floppies!””