Picture this...but filled with judgment rather than water

There she was, 8′ x 8′ of steamy, bubble-massaging, jet-pumping jacuzziness.  Complete with folding cover and a box of chemicals that was big enough to start a CSI lab in the shed, the 6 person “whirlpool spa” was built into the deck that protruded from the screened in porch in the backyard.  We already loved what we had seen from the inside of the house, but this little extra put us over the top.  “We could spend every night out here babe,” I said to my wife as we shared visions of drinking margaritas while looking up at the stars.  “We’ll get so much use out of this, it’ll be ridiculous!”  It was the summer of 2005 and we had found the perfect house to start our lives together.

Fast forward to the winter of 2010.  Four and a half years, a broken cover, and a box of expired chemicals later; there she was.  8’x8′ of empty, dirty, bubble-less polyethylene, sitting on the deck mocking us.  Like the gym membership card in your wallet that makes fun of you behind your back to your credit cards and drivers license.   You want to prove it wrong, but you also know you’re never going to that gym.  So there it remains, day in and day out, judging you each time you open your wallet to pay for that greasy burger you just ate.  Finally, after months, or maybe even years of lying to yourself, you suck it up, realize you made a poor decision, and give that gym card the boot.

So after years of telling ourselves we’d use it, but tallying far fewer star-gazing, margarita-drinking nights than we dreamed of that day in 2005, we decided it was time to cut ties.  Izzy was turning one in the spring and we had talked about having her party at our house.  We have a fairly large backyard for a townhouse, but we wanted to spruce it up a bit.  We had a plan.  Get rid of the hot tub, remove the small deck it was sitting on, and have a patio installed in time for the party in April.  Sounded simple enough.

Cue the back to back blizzards within 72 hours of each other leaving 3 feet of snow in their wake.  We live in a town called White Marsh.  It is called this for a reason.  Underground springs can be found throughout these neighborhoods and even during a drought in the middle of summer, you can find water hiding just below the surface.  So what does this have to do with our plans for the backyard?  Well, what do you think happens to a yard that is perpetually soggy when three feet of snow melts into it?  It becomes the perfect location for a mud wrestling arena.  Unfortunately, that was not part of the plan.

We assumed this “simple” backyard makeover would be completed well in advance of the big birthday bonanza.  The fact that our backyard resembled the set of WaterWorld for several weeks however, threw a monkey wrench into that timeline.  We had chosen a contractor for the patio and had demolished the deck but had to wait quite a while for the ground to dry out and the work to begin.  We had figured on trashing the tub, hauling it off to the dump for its final resting place, but the delay in the project gave us time to think and so we came up with another idea.  Craigslist.

If you’ve never had the pleasure of visiting Craigslist, I highly recommend it.  If you’re looking for a copy of “Frampton comes Alive”, you can find it on Craigslist.  If you’re looking for someone to provide you cello lessons in return for giving them your collection of mint condition cabbage patch dolls, you can find them on Craigslist.  Craigslist is the eHow of the online marketplace.  There is nothing you can’t buy or sell, except for people…I believe they outlawed that.

Anyway, with some time to spare prior to the patio installation, I wrote up a little advertisement and posted with it a price of $500 or best offer.  I received several responses right away, asking for additional information about the tub.  A few days passed and the interest tapered off, except for one individual who requested a visit in order to take a closer look.  He came to be known around our house as Biggie.

He was the first to respond to the initial ad and the only one who showed any real interest in the tub.  He wasn’t sure it was what he was looking for but wanted to see it in person.  The email exchange went something like this:

Me: The manual says it seats 6.

Biggie: Yeah, but that’s like side by side right?  What if you had people on your lap?

Me: Well, I guess it would seat a few more then.

Biggie: Yeah, cool.  Can I swing by Saturday at 3?  Imma bring my girl too.

Saturday at 3:00 came and went.  It was nearly 3:45 and it appeared Biggie had decided not to show.  Then I saw it, the low-riding, rim-spinning Cadillac.  It pulled up in front of the house and I could see that the driver’s side was noticeably lower than the passenger’s.  I couldn’t see inside as every piece of glass on the vehicle was tinted to the point of being opaque.  But I suppose that’s how you roll when you’re a rap mogul. 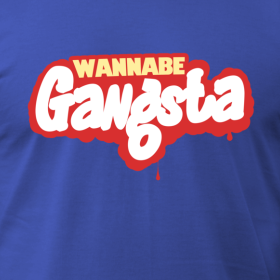 Livin' in a Gangsta's Paradise

The first thing I noticed, other than the fact that he looked like a white Biggie Smalls, was the cream-colored track suit he was sporting and the thick gold chain around his neck.  I met him and his girl, whom I assume he borrowed from the set of a hip-hop video shoot, and led them to the backyard for a first-hand look at the spa.  He paced around the tub like a bear around a campsite.  He didn’t ask any questions, just winked at his girl a few times, then grabbed the side with both hands and shook it violently.  I’m not sure what he was testing with that move, but he seemed satisfied with the results.  They stayed for just a few minutes before telling me they’d “let me know”, then he waddled back to his pimp-mobile, girlfriend in toe, and drove away.

Several days passed with no word from Biggie.  I took it upon myself to email him to find out if he was still interested.

Me: Just checking in to see if you’re still interested in the hot tub.

I couldn’t believe I was being swindled by a guy who plans to stack people on top of each other in a hot tub.  $100 was practically armed robbery.  Having been informed earlier in the day however, that the contractor was ready to begin immediately on the patio, I knew it was either sell it or trash it.  I had made it clear in the advertisement that it would be the buyer’s responsibility to haul the tub away, but with no time to spare, I was a bit concerned about getting it out in time.  I emailed Biggie.

Me: Ok, $100 it is.  But here’s the thing…can you come get it today?  I’m having a patio installed tomorrow and I need it gone tonight.

Me: Now you’re killing me. Yeah, that’s fine, just get it out of my yard asap.  I hope you remember how big it is?  You’re gonna need some help.

I arrived home from work around 5:30 and started dinner for Izzy and me while Jen was still at work.  I had lost track of time until I suddenly heard a commotion coming from the front yard.  I opened the door to find two truckloads of Biggie’s crew leaping out of the beds of their trucks like a bunch of redneck-gangsta clowns.  I felt like I was on an episode of COPS as the guys started shouting obscenities at each other while their respective “girls” sat on the curb.  I pointed Biggie in the direction of the backyard and told him I was inside if he had any questions.  He gave me the man-nod and led his boys back.

As dusk settled in, I remained inside with Izzy, sneaking a peek outside every so often to see what was going on.  It was 6:30 when I took my first look.  There must have been 10 men out there, all standing around the tub just staring at it while shouting ideas back and forth as to how they were going to move the thing.  45 minutes later, I took another peek.  It was as if time had stood still.  There had been no movement from any of them, and especially no movement of the hot tub.  Now I was getting concerned.

Jeff, my neighbor, came over as he could hear the commotion and wanted to witness the spectacle for himself.  We stood there watching as the braintrust threw out one idea after another, then shot it down with, “What the f@#% man…that ain’t gonna work!”  Minutes turned to hours and still the hot tub remained.  Despite their outward appearance, which shouted total slacker, these guys refused to give up.  There was no way they were going to leave this night without their 22-person, jet-pumping, party tub.

Jen arrived home from work just after 8:00pm and the posse remained entrenched in the backyard.  As I regaled her with the events of the day up to that point, we suddenly heard noises coming from the front yard.  I quickly glanced back to the site of the tub to find that they had done it!  Those crazy, wanna-be-thug, redneck bastards had done it!  We opened the front door to see all 10 of them sliding the hot tub across the yard.  They had used the two halves of the once-functioning cover to lay the hot tub on sideways and then drag and push it through the yard to the curb.

A flat-bed trailer was attached to one of the big trucks and the guys lifted the tub onto it.  It didn’t fit properly of course, so one end was hanging off the trailer, just inches from the asphalt.  I could just see the headlines in the paper the next morning; “Hot Tub Tumbles off Trailer, Causes 32 car Pileup”.  I cringed at the thought, but it was no longer my problem.  Biggie peeled off a fifty from his rubber-banded bankroll and I gladly accepted.  The guys piled into the trucks, and some into the hot tub, and they slowly drove away.  I held my breath as they turned the corner, making sure they were out of sight before not worrying what happened to them from that point on.

The next day the contractor arrived, surveyed the area again, and determined it was still too wet for them to begin work.  Figured.  The project didn’t get under way for another couple of weeks after that, but thankfully was completed just in time for Izzy’s big birthday bash.  Sometimes I wonder what became of Biggie and my old hot tub.  One things for sure though, the old girl’s getting a lot more action then it did back at our place.

4 thoughts on “Biggie and the Hot Tub Hoopla”