You may have noticed the absence of my weekly post from your inbox this time last week.  I’ll take your silence as a “Yes, I was emotionally distraught and felt a gaping hole of emptiness inside for the past seven days.” as opposed to, “Huh?  You didn’t write anything last week?  What do I care, it just goes into my spam folder anyway.”

Well, if you haven’t heard, a little storm called Hurricane Sandy ravaged the east coast for about 48 hours last week and she would be to blame for my missed assignment.  Of course, she is to blame for far more devastating results than a simple blog schedule so I am thankful for having only that to complain about.  As the wind and rain pounded my neighborhood, we prepared for the worst and hoped for the best.  Then the lights went out.

Having been glued to my television over the past couple of months watching the newest NBC drama “Revolution”, I felt supremely confident in my ability to handle the situation.  I immediately checked my neck to see if by chance I was wearing one of those fancy necklaces from the show that seems to turn everything back on.  Nothing.  Crap!  With Plan A shot to hell and no real Plan B to speak of, I improvised.

I rushed downstairs to the kids coloring table and started drawing up a rudimentary constitution with a bunny-shaped crayon for the new government I would need to put in place.  The Chaney Republic would lead us all out of the darkness once again, I was sure of it.  I included articles such as “The right to free speech” and “All kids have to listen to their parents”.  Upon completion, I signed my name all John-Hancock-style at the bottom and handed it to my wife who said, “What the hell are you doing, go check the sump pump.”

Next, I thought about a few trusted individuals that I could use as advisors during this time of upheaval and transition; Mr. Battaglia (My High School history teacher), Ray Lewis (Baltimore Ravens middle linebacker and great at motivating people), and Oprah (Because she’s Oprah).  I wrote up letters to each of them explaining what their roles would be in my new government, then went in search of carrier pigeons.  I didn’t find any.  So I fashioned each letter into a paper airplane and sent them into the night sky.

“We have to stockpile our weapons!”  I called out to Jen.

“Shut up and change Matt’s diaper!”  She replied. 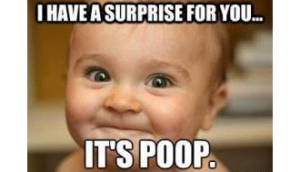 My mind raced as I donned the bio-hazard suit and cleaned up the explosion in my young son’s pants.  That’s when it occurred to me; the diapers were our best weapons.  I quickly emptied all the diaper genies in the house and constructed a catapult of sorts out of a slinky, two rolls of wrapping paper, and a few pairs of Izzy’s stretch pants.  The smell was repulsive, but it was worth it to keep the outlaws and rebels at bay.

I assigned job titles to everyone around me.  Jen would be our new surgeon general with her nursing skills and ability to not pass out at the sight of blood.  Izzy would head up the militia, putting her new bad-ass attitude to good use while Jake would serve as her right-hand man since the boy can’t be more than five feet away from her at all times.  Matthew would serve as our new judicial system.  If you are accused of a crime, you must come before the court and hold Matt.  If he cries; you’re guilty.

As I prepared the dining room table for my first meeting of the council, I felt good about what I had accomplished so far.  There would be much more to do, but The Chaney Republic was headed in the right direction and all my hard work was paying off. Just then, the lights came back on.  I looked at the clock; it had been five minutes.

I think I’ve been watching too much TV.

4 thoughts on “The Real Revolution”